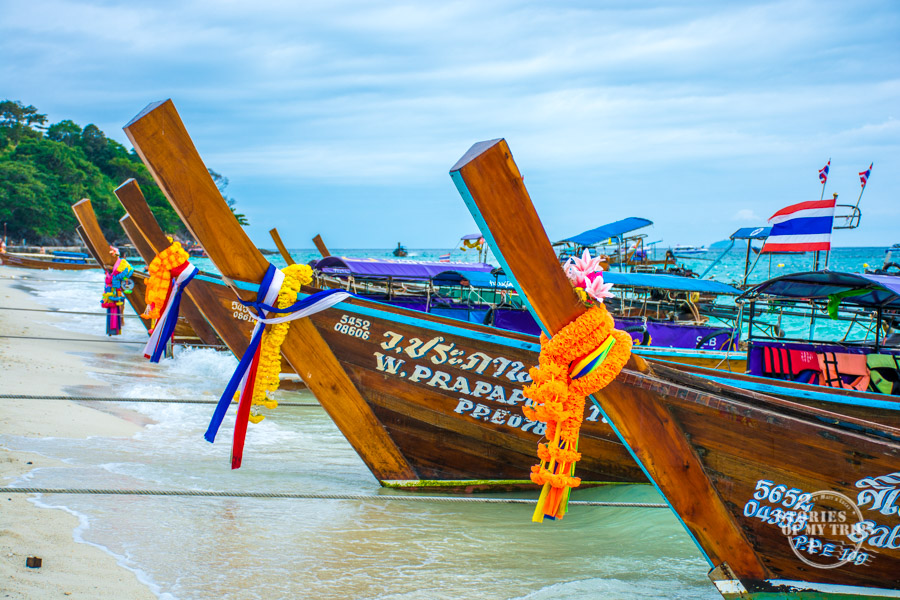 Thailand has a very well developed transportation system (compared to its neighbors) and there are many options. We did not have any problem moving around, neither in long distance bus nor in the local buses or ferries. The most difficult thing about Thailand is deciding where to go because there is so much to see and the distances can be long. There are many travel agencies so it is worth asking in different ones to get better prices and even negotiate.

One month in Thailand

We landed in the evening at the Phuket airport, where the “taxi mafia” was waiting,  and of course they assured us that there was no more public transportation and that we had to take a taxi for $20. It was 8pm, but we decided to go to the domestic terminal, where we actually found the bus that would take us to the town of Phuket, despite what we had been told. We stayed there for 3 nights in the small town of Phuket. From there we went to the beaches of Kata, Karon (the most beautiful and quiet) and Patong (known for its nightlife). We took public buses to go from the town to the beaches. The buses leave from the market, but you need to be careful with their schedules because the last bus back, returns very early to the town.

From Phuket to Ko Phi Phi

Our next destination was the island of Ko Phi Phi. We took a big ferry from Phuket and when we arrived, someone from our hotel was waiting for us, to take our bags around the crooked streets of the town. We enjoyed 3 nights of beautiful quiet beaches away from the center and witnessed its bustling nightlife. There are no cars in Ko Phi Phi. But is is small enough to walk around, or use long tail boats to go to other islands.

Another big ferry took us further east to the more laid back and relaxed Ko Lanta. We also stayed there for 3 nights and used the free scooter that our hotel gave us, to go to the different beaches that were mostly empty.

It was time to start going up north, so we bought a ticket for van that drove us to Ao Nang. We stayed there for a couple of days where the goal was to go to a small beach between cliffs called Raylay, which can only be reached by long tail boat from the main port in Ao Nang.

From Ao Nang to Ko Tao

Without checking the weather forecast, we headed to the Gulf of Thailand, specifically to Ko Tao. A bus and a long ferry ride that stopped first in Ko Samui and Ko Pha Ngan, dropped us off on the island. Unfortunately it was two days of non-stop rain where we couldn’t enjoy the island at all. Several floods were affecting all 3 Gulf Islands and so, we were unable to do all the things we wanted to do, like snorkeling and diving.

From Ko Tao to Bangkok

We had to move on, and so we made the decision to take the ferry to the mainland, since we were headed to Bangkok. It was still raining and we did not imagine it would be 3 horrible hours of unbearable waves on the boat. A mistake not to repeat. The ferry dropped us off us at the port of Chunphon and a bus took us to Bangkok (all included in the same ticket that we bought at our hotel). The big city, with its temples and contrasting modern shopping malls, and alleyways, kept us busy for 4 nights.

From Bangkok to Kanchanaburi

We then decided to go to Kanchanaburi. We bought the tickets for a minivan in a travel agency, and it took us a couple of hours to arrive. There we spent the time  visiting the elephants in the Elephant Nature Park,  and reliving stories of World War II visiting the death railway. We stayed there for 3 days too.

From Kanchanaburi to Ayutthaya

We continued our journey to the north and visited the historic city of Ayutthaya. We got there by taking first a local bus to Suphanburi and then changed to a small van that dropped us off at our destination. We rented a motorbike and Two nights were enough to visit the different ruins of the city.

From Ayutthaya to Sukhotai

Continuing up north we found the city of Sukhotai, which we reached by bus. This town has a big historical park of ruins that can be visited by bike. It is very big, green and quiet. We also stayed two nights here. Don’t miss the Sukhotai noodles, they are delicious!.

From Sukhotai to Chiang Mai

We took a bus to Chiang Mai where we stayed for a week. When we arrived, there were several songthaews waiting and overcharging travelers. We turned them down and we walked outside of the station where we found the public bus (B2 that goes from Arcade bus station to the airport) that took us to the Chiang Mai gate, where our hotel was located. From there we did many activities, such as meditation courses, Thai cuisine classes, tours of temples and hikes to nearby places outside of the city. The city offers a lot to enjoy and learn about the local culture. There are many markets and the food is really great. There are many options to go around the city. We used motorbike, songthaew, public buses and joined a tour to visit Doi Inthanon.

We took a bus to visit the White Temple in Chiang Rai, located about 3 hours north. We bought the tickets from the Green Bus office in the center the night before and left at 9am. From the bus station in Chiang Rai we hired a tuk tuk that took us to the Temple, and then another one that took us back to the city. We took the bus back to Chiang Mai at 7pm and were back by 10pm.

In Chiang Mai, we ended our trip in Thailand and from there we took a flight to Myanmar, specifically Yangon, which is the financial capital and the most important city.

There are many things about Thailand that we want to write about. In future posts we will give more details about our experiences in this country.